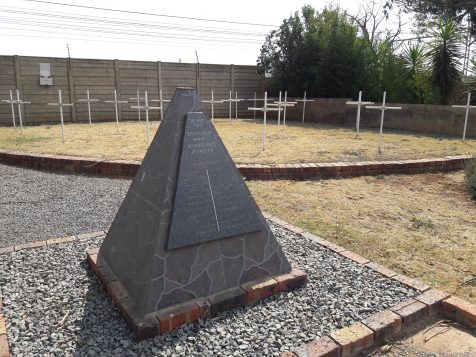 Is the windmill the official emblem of Midvaal? If not, it should be, as you see them everywhere; not so much in the veld, mind you, but on handbags and spinning gently in sales lines at the robots.

The only full-size one I can really recall is on the road to Daleside, around the corner from Annette Cloete at the entrance to Henley on Klip from the R59. We go past it often and I’m always so busy admiring it – it’s the one with psychedelic colours – that I have no memory of the driveway and thatched house beside it. No doubt it was somewhat overgrown when we first arrived here some nine months ago (how time flies!).

We have also cruised the area looking for the memorial to the 23 Henley schoolchildren who died when a train hit their schoolbus in 1970. The tragedy is covered extensively on the Internet and at the Henley Museum, but we knew that somewhere there was a pyramid-shaped gravestone. We couldn’t find it. Nobody we asked knew where it was. We assumed that the South African flag on the empty ground by the Henley Bridge had something to do with it, but while there is an arrow of darker green plants pointing to the bridge, there is no memorial.

Enter The Windmill. We heard on the grapevine – yes, there is one in Henley, well, kinda – that a new coffee shop had opened in Highbury and, incurably nosy, we went to look for it. No signs yet, but the blackboard listing coffee shop specials was a dead giveaway.

We turned into the driveway by the multi-coloured windmill and there it was at the end overlooking the railway tracks – the memorial. Twenty-three white crosses under a giant eucalyptus tree, the stone pyramid with the names of the children, information boards and, heartrending, pictures of normal, smiling, happy children whose lives ended too soon. Several were siblings. Imagine losing your whole family on one afternoon! It was a long time ago, but for any parent it still reverberates. The hero, of course, is matric pupil Johan le Roux who threw two boys to safety, but didn’t get out in time himself.

On the left, we looked through a gate at a Western movie set – buildings that look whole, but only consist of the front wall. I found myself peering around for John Wayne or Clint Eastwood. Luckily the specials board was more substantial and so was the path to the front door and elegant interior of Henley on Klip’s new coffee shop, The Windmill, at Highbury House.

It is possible Highbury House was one of the original buildings dating back to the founding, but I’m not sure about that. According to the proprietor Dee Nuss-Brown, Highbury House is in Henley, but the plot next door with two function rooms and the tea garden-to-be is in Highbury.

Is that a problem? Was there ever a feud? Were there gunslingers in the OK corral, or did Highbury and Henley simply choose sides with cricket bats?

When we arrived, the coffee shop had been open for five days after three weeks of hurried and harassed renovation. You wouldn’t think it. The shop is a relaxed country retreat with glossy wooden tables, wooden beams and thatch and a cosy outside patio planted with herbs. Around the back, Dee showed us proudly, are two elegant function rooms for private parties or even – her dream – a weekly ballroom social. It’s not all complete but spinning along the pipeline.

The menu is coffee shop style – burgers, rolls, quiche, curry and rice, specials of the day, with a selection of cakes and muffins and a freezer of takeaway meals. There’s no liquor licence – Dee doesn’t want one – but you can bring your own. There’s also a tasteful arrangement of arts and crafts. Prices are competitive.

So, if you’re looking for a quiet spot for coffee, or a lemon meringue pick-me-up, head for the multi-coloured windmill on Bokmakierie Road – and don’t forget to spend a moment at the memorial.