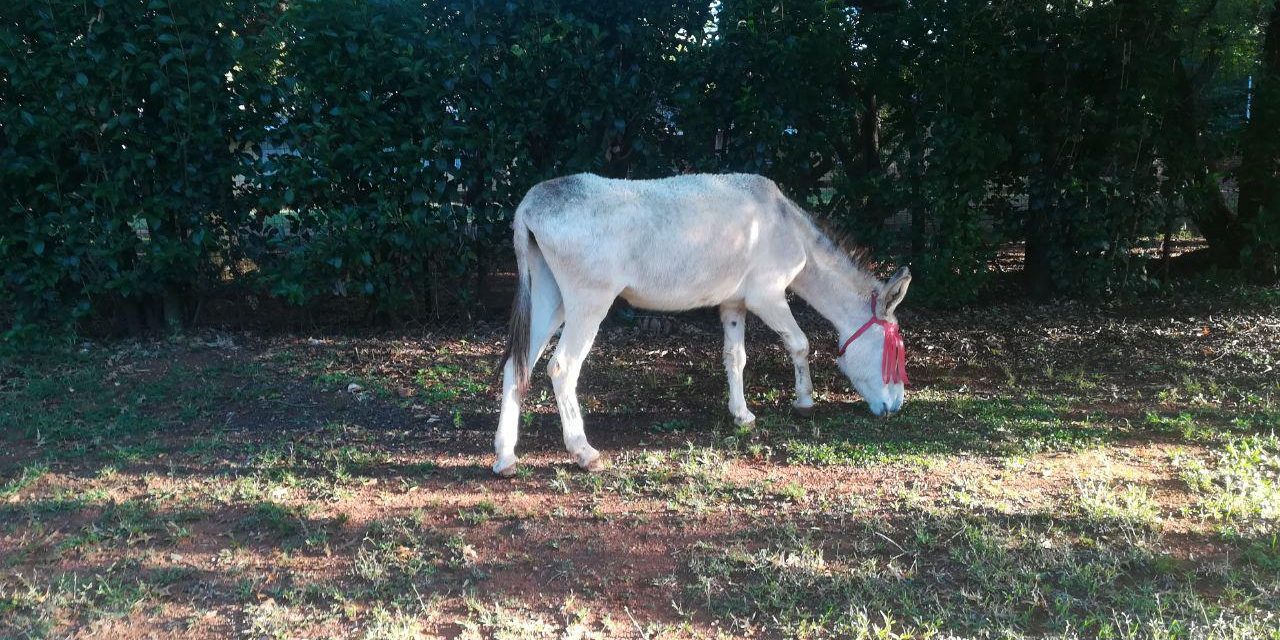 What do you do with a stray donkey that refuses to move when you are not sure where she lives?

It took five adults, two children and a handful of carrots to solve it. Finally, Molly was delivered back home, where someone, no doubt, will get an earful for leaving the gate open.

It’s not the first time either. We are getting to know this very sweet, little white donkey. Dear Henley, never a dull moment.

She was found down in Ewelme Road, on our main drag. It’s such a strange name. The other day I ran into a newbie who was struggling to pronounce It. I don’t blame him. I also battled and I’m not sure I have it right even now.

So why is our main street called Ewelme?

Henley on Klip, of course, was named after Henley on Thames, the hometown of Advocate Horace Kent who set up our village.

Ewelme, I discovered, is a village in Oxfordshire. One minute from Henley on Thames by air, Google informed me, but recommended I drive 13 kilometres.

Judging by the pictures, it’s a delightful little village, even smaller than our Henley, population around 1 000 at the last census. The name, Ewelme, comes from the Old English and means “whelming waters”. The village was mentioned in the Doomsday Book, the survey ordered by William the Conqueror. It also has links to Geoffrey Chaucer through his granddaughter Alice, Duchess of Suffolk. Her tomb and effigy is in Ewelme’s old church, which was used for the filming of Les Miserables in 2012.

How’s that for history?

All right, so Henley on Klip can only claim descent from 1904, which is not bad for South Africa. “Oh,” my daughter exclaimed, “that’s why the pizza shop is called 1904!” Duh!

I love finding out unexpected bits of history, just as I love cruising our streets. They may not be Ye Old English, like Henley on Thames and the adjacent villages, but there are an amazing assortment of building styles, from the roof that sticks out like a ship’s prow, to neat triangles, old stone houses, quaint round hobbit houses, peaked thatch huts that look like wizard hats, and the mansion in Shiplake with mermaids and fish on the windows.

The other day I was stopped by a lost truck looking for St George’s among the host of saints – St Andrew’s, St Patrick’s, St David’s.  I took a flyer and directed him across the river. England’s patron saint belongs with Eton, Oxford, Cambridge and that lot. I was relieved to discover I was right.

According to history, it’s Eton, not Eaton, and Chalgrove, not Charlgrove. They are also villages in and around Henley on Thames. Someone, Advocate Kent no doubt, was very homesick.

Shiplake … that’s another village. So is Eynsham, Iffley and Cleeve, even Speen and Abingdon; all those odd names that give Henley its tongue-twisters.

By the way, Wargrave is also a village – no war graves in sight, at least not around here. Why it is shaped in a U, like a war grave, I have no idea. There have to be a few mysteries somewhere.