A friendly wave and a helping hand

As you enter Henley on Klip, a sign welcomes you; further signs inform you that here we care for our residents, our children, our environment and our animals.

It’s a nice touch, especially as it seems to be true. Well, in any community there are some who do not abide by the rules, but generally in our experience it’s true.

Henley people wave! Such a little thing, but I am still astounded every time. Cars drive past and people wave. Naturally I wave back. It’s so cool. Often, I wave first and they wave back. It’s just as cool. If I greet a passer-by and say: “good morning … afternoon … evening” … they greet me back.

In Joburg we did the wave and greet with our neighbours, but only in our street. Here it’s everyone, all the time. It’s very, very cool!

Then there are the animals … dogs, dogs, dogs and dogs. Understandable, of course, when properties are so large.

We started walking our two German Shepherds to The Oval, but whatever road we chose, we were greeted at just about every gate by a horde of dogs, big and small, all barking, high and low. Top marks went to the Great Dane and Chihuahua side by side. At another gate we were greeted by 12 dogs (I counted), with another lot yelling at the gate further back. I would take a flyer at 20 in all. That’s a lot of dogs.

My bitch, who loves to greet, didn’t know where to look, especially as we insisted she walk on heel and behave, which she considered most unfair. As this was very early morning I don’t think we were too popular. We have since moved our walks to the farmlands where the dogs are a little less overpowering.

We were warned, though. Before we headed this way we discovered Henley Pet Network (PetNet) which lists lost dogs and reunites them with their owners. A wonderful mission, but how do you know whether a dog is genuinely lost, or simply out for a stroll? Junior found a dog roaming when she was cycling one day. He was hurt and she was very worried. With the help of passers-by he was transported to a vet. When his picture went up on Facebook responses came thick and fast, that’s old …, he lives in … Obviously a regular truant. I suppose we’ll get to know them all in time. At present we stick our heads out of the car window and say: “Go home” sternly. I hope they do.

Cats. Lots of cats. They are not so obvious because cats are, well, not so obvious. Henley cats are good at slinking around. I doubt they go hungry either. 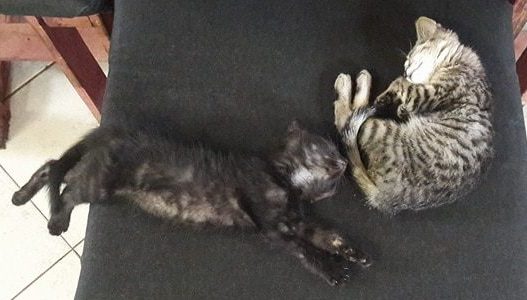 Our cats occasionally dine on fresh-caught delicacies too. Cats will be cats.

Junior, though, went one step further. Spotting two sick kittens crouched in the sun in a filthy cage outside a pet shop in Meyerton, she tore in, confronted and removed them. Steve at Twisted Realm Creations, where she was working at the time, fostered them with his sizable cat pack while the homefront adjusted to the idea.

They moved in yesterday. Nobody is quite sure. I never knew a kitten could growl so loudly. The rest is Junior’s story, but right now, she has her hands full. It’s tough being a mom!

Then there are the roaming bunnies, the peacocks (thanks for your feathers, guys, they’re beautiful!), my friends the donkeys, springbok, ostriches and, of course, the alpacas. We still haven’t tracked down the story of the alpacas. We’ve spotted a bit of wildlife too, a genet darting across Henley Drive. Run fast, little genet, some drivers use this as a racetrack.

Oops, I nearly forgot the horses. This is no one-horse town. Three riding stables that I know of, and probably more. Our usual morning walk takes us around Millbrooke where there are plenty of noble steeds to admire.

Finally, there are the cows … we visited Serendipity to check out their Sunday special and the sparkling pool they keep urging us to use (It does sparkle. It’s very tempting). On the way we passed the cows: plump, healthy, glossy-coated, brown cows. It would be an honour to drink their milk.

Among the first Henleyites we encountered were Mareli and Ron from Balls an’ All. Again, I was astounded. What a worthy charity, taking care of animals when their owners cannot afford it, ensuring they are sterilised so no more unwanted animals are born into desperate circumstances.

Not long after, we found Ron and Mareli at The Hound staggering under cardboard boxes of second-hand books collected and sold to raise funds for their work. I’m a sucker for books, the Man can’t stand by while others are struggling, so we pitched in. Apparently, there are many more books in storage. I’m licking my lips.

No more staggering under a mix-up of cardboard boxes though, packing and unpacking, not if we can help it, especially with Ron in and out of hospital. We aim to streamline. A pile of plastic crates has been donated (thank you, all) and now we are seeking folding tables. It will make life much easier all round – good for the animals, good for the readers and good for Mareli’s back. Win, win, win.

H0K Jan 16, 2018 Jennifer's Blog Comments Off on A friendly wave and a helping hand
Touching the past at Henley’s museum NEWER ENTRIES
OLDER ENTRIES Taking around the tourists