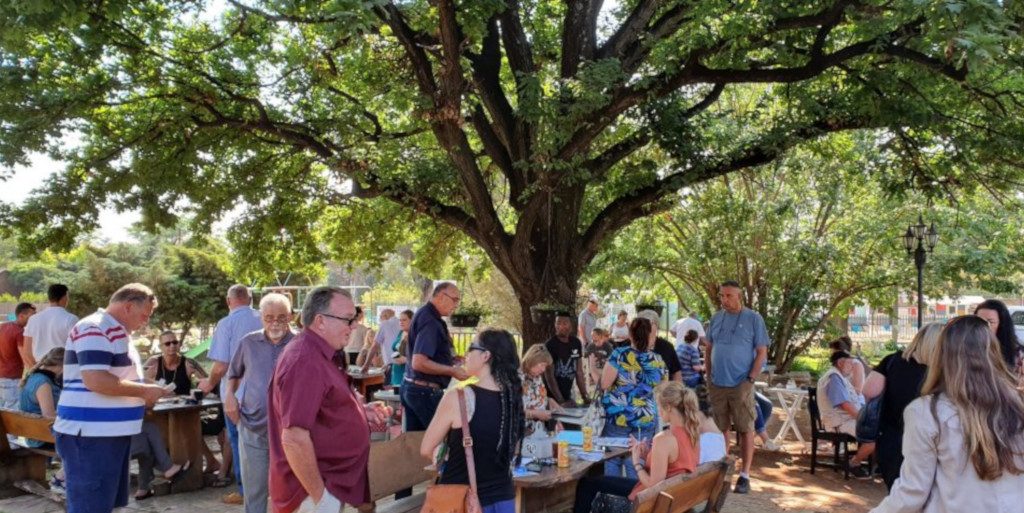 The birds at About Time Gift & Coffee Shop must have been astounded – they can’t be used to fifty-odd people milling around under their tree at 8am on a Thursday morning.

Who would have thought there were so many entrepreneurs and business people in Henley on Klip? The parking lot was crammed and spilled over into the Henley Hardware space, which was no problem as proprietors Arthur and Sue McDonald were at the function.

It was the launch of Henley Network (name to be decided), a venture led by Tim Stapleton, which surfaced on social media only two days earlier. Nobody expected such a turn-out and some had to apologise for running short of flyers and brochures.

After two years in Henley, I recognised quite a few: who could miss Dee from the Windmill and Steve from Twisted Realm Creations, our hostess Coral from About Time, Dave and Debbie Anthony, Joe Gomes and John Theron, Dine with Debbie, Bob’s Hobbies and, always vociferous, Gary and Mandy from The Bird Nest, and now The Bowler too.

After a brief introduction by Tim Stapleton, everyone had a chance to introduce themselves. We had bookkeepers and psychologists, graphic designers, horsey people, legal and financial consultants, mechanics and engineers, educators, Pinky from Klip Valley Recycling, Karen Pepper from Bass Lake Adventures, Cheryl Bosch and her crystals – everyone and everything from A (several) to Z (Zeecor).

Of course, even I could list many who were missing. There wasn’t much notice, after all, and not everyone checks into social media every day, but there is still time to join. Notably, most of the tradesmen were not present; perhaps they were all working! There is a Henley Network WhatsApp group and all those who have signed in are listed on this website – www.henley-on-klip.co.za

After the introductions, people were free to interact and network. If you were lucky, you got an E-Drink from Johan Bakkes, who bottles his vitamin enriched drinks here – he also didn’t come prepared for the numbers that turned out!

Another meeting is planned in two weeks so keep an eye out on social media. A Facebook page is also in the pipeline.

Meanwhile, some report that the networking is already paying off in new contacts and clients.

It can only help us all to know what people are up to, and what services are being offered in our Village.