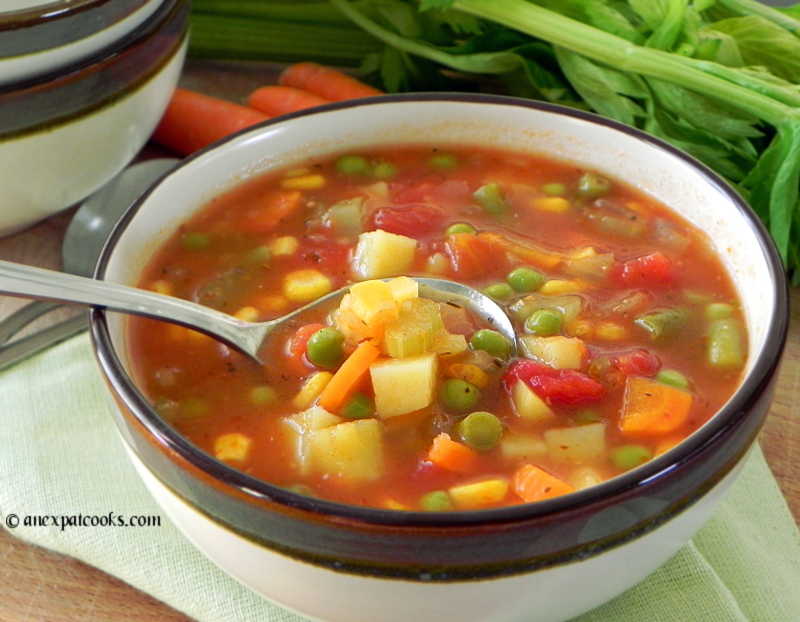 I met a mosquito in pyjamas the other night, but I think he was the last of his breed. Goodbye until spring and good riddance! Every morning now our so-called lawn is white with frost and even the weeds (some of them) have shrivelled.

I’ve been warned by most of the Henleyites I’ve encountered that this is only the beginning. “Wait until July,” they say, “it’s going to get much, much colder.” Bring it on. I love this time of year, the crisp, cold dawns, mist hanging in the trees and the horizon blushing red with the dawn. The sunsets are magnificent, especially out near the flat expanses of the mielie fields, with a reddish-orange sky accented by streamers of grey and gold outlining white puffball clouds. The lights of Meyerton sparkle along the horizon and the cellphone towers stand out like red torches.

I can see that I will have to brush up on my soup skills. Soup seems to be on the menu at every social occasion now and my soup tends to be a hit and miss affair. It never tastes the same twice.

The best lately has been Olga’s sublime home-made pea and ham soup at the Serendipity Farm Stall on the road to Golf Park. Olga has big plans for the stall. I’ve been stopping by for milk, fruit juices and eggs since we arrived in Henley six months ago, but

now she’s added home-made butter, varieties of honey, tubs of yoghurt and tasty rounds of cylinder bread. I really want to see how they are baked! Oh yes, don’t forget Dave’s home-smoked bacon and cheese at prices well below the supermarkets.

This seems to be the season of readily available goodies. Cyrus Farm is getting into the act with the biggest chickens you ever saw. I bought the smallest Jennifer had and it barely fitted into my oven. It was a mere paltry 3kg of poultry. They go up to 6kg. Cyrus Farm also has eggs, butter, bread and other basics. You have to place an order, then pick it up at the Hound on Fridays, which gives you the chance to collect supper too. The Hound makes a mean pizza.

Tomorrow (Saturday, June 9) is the monthly Forage Food market at the Hound. It had a slow start, but last month there was a pleasant buzz. Cyrus Farm is usually there, the ladies from Meyerton Methodist come over with cakes, scones and muffins and there’s an assortment of jams, chilli products and sauces. I hear Magriet plans to be there tomorrow with cookies and rusks.

The Country Kitchen moves to the Hound for the day, so if you’re used to calling in Regatta Road for your mini-quiches, keep going around the corner. You have to be early, though. Jeann bakes extra for Forage Food market day, but sells out quickly, which is no surprise at all. She usually has a selection of cheeses, jams and other exotic delicacies as well. You can also get Neil’s Pies from Country Kitchen these days. I’d heard heaps about them and finally I nagged Angus so much he brought some home for me. Juicy, tasty, real meat pies!

Vendors of fruit and vegetables and smoked meats have also been invited to the Forage Food market and maybe one of these days they’ll turn up. Naturally the Hound gets a bite in too, offering bread straight from the oven, packets of Mark’s special meringues and boerewors grilled on the spot and served in a sourdough roll.

There’s no cost to set up a table if you have artisanal goodies to share (artisanal – a phrase culled from Mark, chef-speak for foods made by hand using traditional methods).

I was told I would miss Woolworths when we moved here. Not a chance!