It was Sunday afternoon in the big city. Children were screaming at play, a couple quarrelling in the street, loud music from at least two locations, “doof doof” bass shaking the windows from a taxi passing by …

Out of the blue the Man proposed a drive into the country. Surprised I agreed. He took the road to the Vaal, familiar as we visit the Circus Farm for lunch now and then, but turned off at the sign to Henley on Klip.

Again, I was surprised. We had driven through once years ago; I remember thinking how green and picturesque it was. It is winter now, brown and sere. We pass the ornate signs telling us the community cares for children, animals and the environment and stop on a country road.

You could feel the quiet. The birds sang, the wind rustled through the long grass. Silence. You could almost hear the clouds move.

“It’s so peaceful,” the Man sighed. We had a gentle argument about a bird we couldn’t identify as we returned to the car.

“I could live here,” the Man remarked. He looked at me sideways. “I don’t know about you?”

I was silent. I had commitments in the city, so I had to think. I thought until the end of the street. Then I said, “Let’s go and look.”

We marvelled at the huge properties, the many beautiful houses and all the varied styles. We saw a farm stall and nursery. We noted all the “For Sale” signs and wondered.

As the sun set we turned back to the Big City. We were both thinking hard.

He was on his cellphone, I was poring over my tablet. I was looking at houses, he was looking for crime statistics. I was looking at baths with steps, lavish bars and houses with five garages. He was grunting about the flood figures. I was staring at properties that seemed to stretch to the horizon. He was reading news reports about land claims. “Not a good idea,” he said firmly.

By now I had the bug. I drew up a list of questions, contacted an estate agent and asked. “The murders in the news were a family affair, not house invaders,” she assured me.

And the many “For Sale” signs, low prices and the “reduced” that keeps popping up on estate agent websites? Her explanation was plausible, but Big City Bunnies tend to put estate agents in the same category as politicians.

I searched further, uncovering the back copies of the Henley Herald and Midvaal Ster. Enlightening, to say the least. Henley-on-Klip obviously has an active community. Everyone seems to get involved if necessary. I read about regattas and the Mardi Gras, theatre productions, the local watch, river clean-ups and even residents pitching in during the rubbish strike. Impressive.

He turned on YouTube and we spent an afternoon following the news and documentaries, seeing pictures of beautiful stretches of river, green banks, canoeists taking the rapids and the over-50 drum majorettes strutting their stuff. Smiling faces everywhere. The Big City Bunnies were intrigued, but sceptical.

While I flicked through the properties, learning my way around the town – which wasn’t too difficult – he caught the fever. I liked one property. He was sold on another. I proposed another look-see. He went one better and lined up an estate agent. We hit the road again.

IT DOESN’T LOOK THE SAME

Pictures are deceiving. Pictures of houses for sale are even more deceiving. A property that seemed to stretch forever on the website is strangely small in real life. And somehow the photographer missed all the broken bits.

I had sorted one end of town from the other – well, more or less – but neither of us could fathom the numbering. Do the houses have numbers, or do the erfs? How do you know which is which? It is a mystery.

The second house was equally disappointing. Pictures are worth a thousand words? Don’t you believe it!

We went in search of sustenance. Along a country road, opposite the tiniest house in the world, we spotted tables and chairs on a deck. Aha! A roadhouse, or at least a bar. We had a dog with us, so I went to check it out. I had to rush back and warn the Man.

Stretched out on the couch was a large and very comfortable basset hound, fast asleep.

“He could be dead,” suggested a man propping up the railing.

I wasn’t so sure, so I signalled the Man to bring our dog up the other end. Meanwhile I ordered jaffles and a double-thick chocolate milkshake (for the Man, not me). The straw stuck straight up. He grinned. He is the maestro of the milkshake and Henley obviously passed the test. 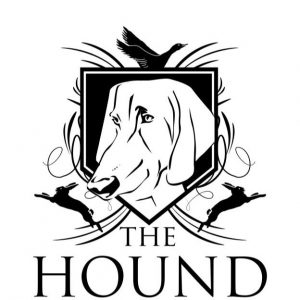 We had landed, quite by accident, at The Hound – hence, no doubt, the hound – which seems to be a local landmark. We were expecting greasy burgers, but the jaffles were delicious and tastefully served. We noted that while the pub catered for official clientele, the unofficial watering hole was under a tree around the back. They were having a good time.

Stoffel the basset hound looked mournfully at our dog, who was being a bit Big City Bunny. The proprietor came to the rescue. Wherever we went, we soon discovered, we only had to mention we were thinking of moving in and the floodgates opened. Jovial, cheerful and full of enthusiasm, he introduced us to the town. The other patrons added a word here and there, while the rock pigeon in her nest in the rafters looked on. I thought she was plaster, like the city pigeons in the eaves at Montecasino, until she blinked a beady eye. The real thing or nothing.

On the way out, I insisted on going down a street the Man had condemned as too far out. The Google survey had been done in 2010, I pointed out, even Henley had probably changed in seven years. I was right. We inspected the house I had in mind from the outside and drew the attention of another joyfully chatty neighbour.

Leaning on our car he regaled us with useful local lore, pithy comments about “old chap” cliques and aesthetic committees, advice on surviving hail storms and connecting to the sewage, and how to get to the local Woolworths (well, not so local, I gathered).

Still laughing, we headed back to the Big City, spotting our neighbour’s short cut to Woolworths on the way.

We took Junior along. This unplanned jaunt into possible madness has also taken her by surprise. A Wits student, she will have to treat whatever we find as a holiday home, but she was keen to see what we were on about.

Meeting up with our estate agent escorts, we embarked on a tour, with fierce three-way arguments in-between. Yes, no, maybe, too big, too small, bad neighbours, too tight, too much work … it’s not easy finding home sweet home, even in Henley.

Showing Junior around ignited our own enthusiasm. Soon we were gushing as much as an old-time Henley resident. One landmark we had to show her was the Oval. We are dog and park people. Walking the open spaces is one of our not-so Big City Bunny habits. In Henley we saw dog walks in every direction, ranging from wide verges, to open plots and here, on the Oval, a well-kept, hopefully safe space.

And there, close by, was the house. It wasn’t on the estate agent’s list, so while they tried to track down the owner, we peered over the wall, matching the views to the internet pictures. Junior and the Man were enthusiastic. Remembering that pictures are deceptive I took a dampening view. We retired to The Hound to think it over.

Stoffel greeted us with mournfully begging eyes and a swishing tail. The rock pigeon blinked her beady eye. We felt like old chums, back on home turf. Junior chose a jaffle, not being familiar with the dish. I offered her snail soup, but she declined.

The Man and I were a bit more adventurous, which paid off. When the fish and chips were laid before him, we all “oohed”. Our neighbour at the next table came over to admire it. Would that happen in the Big City? No ways. The security guard would probably arrest him.

My Sunday lunch was tasteful and elegantly presented, even to the fruit salad which was cut especially for me. Junior ended up with a meringue mountain which defeated her. Real meringues, not that sugary ersatz stuff from the supermarket shelf.

We headed back to gaze wistfully at the house, parking in the driveway. Bad idea. The owner yelled at us. We yelled back: “Can we buy your house?” She invited us in and gave us the tour with a freedom that bowled out these Big City Bunnies. Open your home to strangers who come to the gate without police passes? No, no and no!

Did the pictures match the real thing? More or less. Did it matter? It seems not. Junior and the Man were in love. Me? I’m still trying to get my head around it. It’s a lot smaller. Where am I going to put my books and the piano?

Home, sweet home in Henley-on-Klip… who would have thought it!