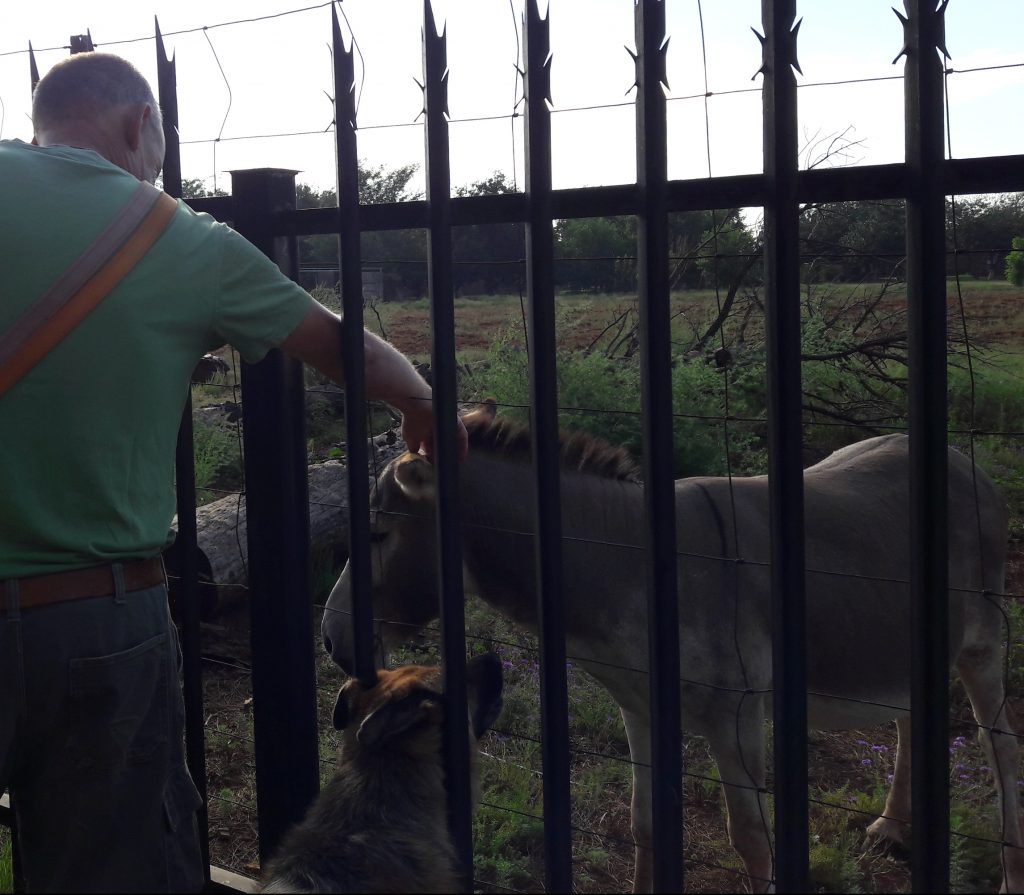 Christmas in Henley 2017 – quiet and peaceful. Alas, we didn’t put out a candy cane. I would have if I had known, but I dumped all our tatty tinsel when we moved. How do you get to know? No idea. I’m obviously not yet tuned into the underground radio.

Christmas church services were also a bit of a best-kept secret. I consulted the Internet which wasn’t helpful, but we took a chance and found a welcoming congregation at St. Andrew’s Presbyterian Church in the nick of time on Sunday. Christmas Day services remained a mystery. Am I missing something?

I gather Henley also decorates for Easter and perhaps by then I’ll be in the loop. I’ll keep an eye out for bunnies, eggs and Easter lilies. With luck, one of them will fit the theme.

Talking of bunnies, we spotted Peter Rabbit in our neighbour’s cabbage patch recently. Later I saw him hopping disconsolately down the road, so he must have been evicted. I fear, though, the cabbages are not what they were.

I have also met the sweetest donkey with the cross of Mary on her (his, haven’t inspected) back. My German Shepherd kisses her nose and they gambol up and down the fence together. There are, of course, other donkeys to greet on our morning ramble along country roads and farm lands. Their “hee haw” provides a bass to the dawn chorus of birds and occasionally the howling dog choir. Locally there is one that is surprisingly melodious. The yapping brigade – not so much. 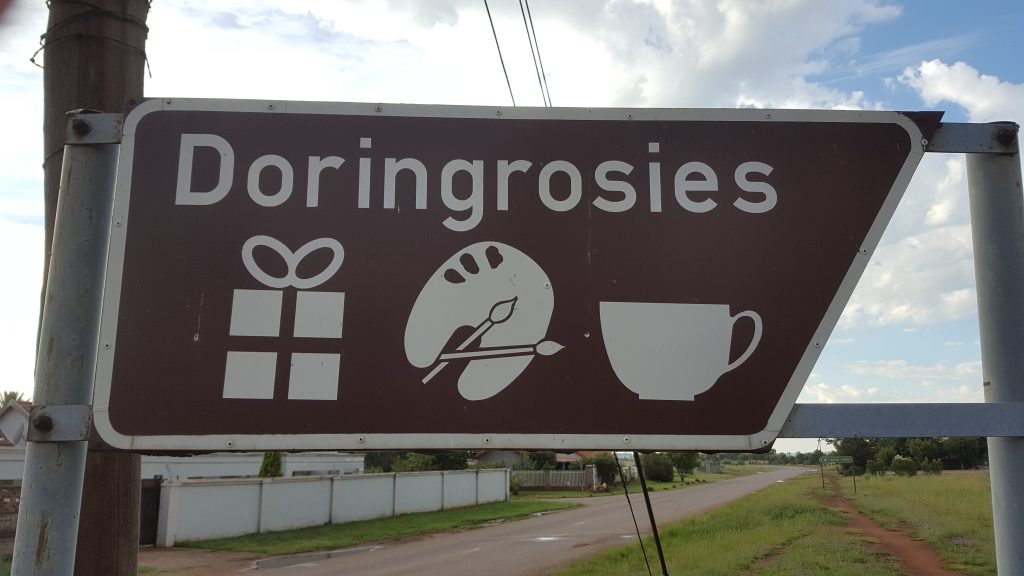 By the way, what’s the story of Doringrosies? Does anyone know? I see there’s a sign to gifts, arts and tea, but not much seems to be happening at this castle surrounded by chickens, ducks, geese and wild flowers. The peacocks have the longest tails I’ve ever seen and must be magnificent in full spread. Mind you, if they tried in this wind they would probably take off. 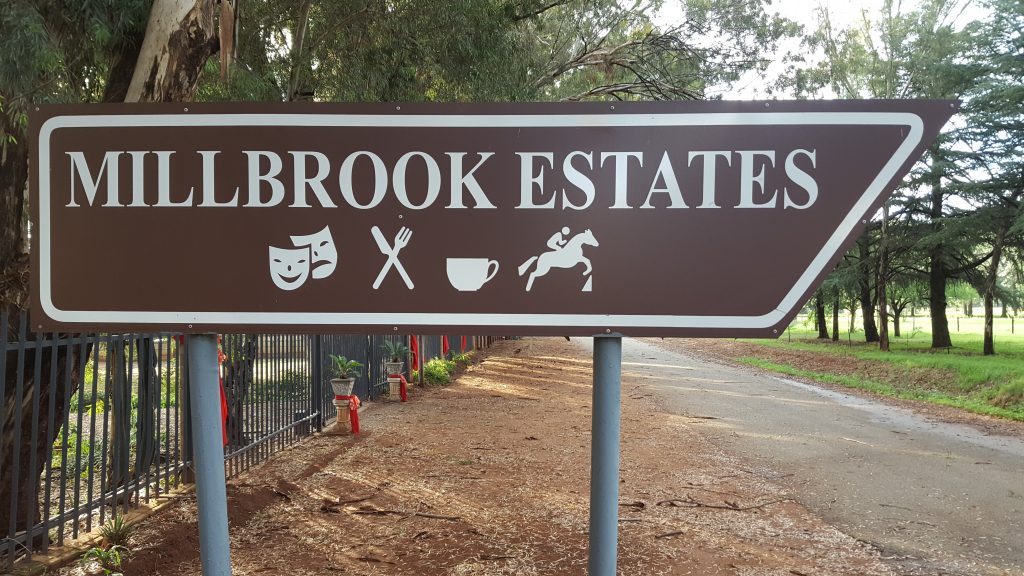 I’ve also seen the sign to Millbrook Equestrian Centre. Horses, yes, the evidence is indisputable – more to follow on this, Junior wants to ride – but nothing on the other attributes, such as performances, food etc. I suppose that also went the way of all things.

At the moment we are taking road trips to get acquainted with our surroundings. Any fears that I am consigned to outer Mongolia are now completely extinguished. You Midvaalers seem to have it all.

Our first stop was the extensive and fascinating catch-all, got-it-all De Deur “mall” (or so I’ve been told to call it). Thank goodness, I had a hat and my walking shoes. Everyone and everything, from weathered farmers and their wives, to ladies in burkhas, to students and young couples, to seasoned, fast-talking businessmen of all descriptions, to eager entrepreneurs, old and young, all in a relaxed and convivial atmosphere. Sofas, stoves, TVs, clothes, second-hand goods, ultra-cheap cleaning materials and loo paper (where do those come from?), fruit, plants, piglets and quail chicks, this market was mind-boggling. We made a pact not to buy, but next time I’m taking a basket.

Next came a trip to orient the directionally-challenged girls and introduce the two Vs – Vereeniging and Vanderbijl – freeways, wide streets, factories and cryptic signposts – SW1, CE etc. I gather those are suburbs. Imagination fail.

Shops, big shops, supermarkets, malls, anything and everything – and the river too. Beautiful Stonehaven on Vaal, awash with flowers, supplied a glimpse of water, boats and a milkshake. Busy, busy … seven functions that day. A bit too busy for us. I admired a sleek, burnished hen placidly sipping from her very own water bowl. 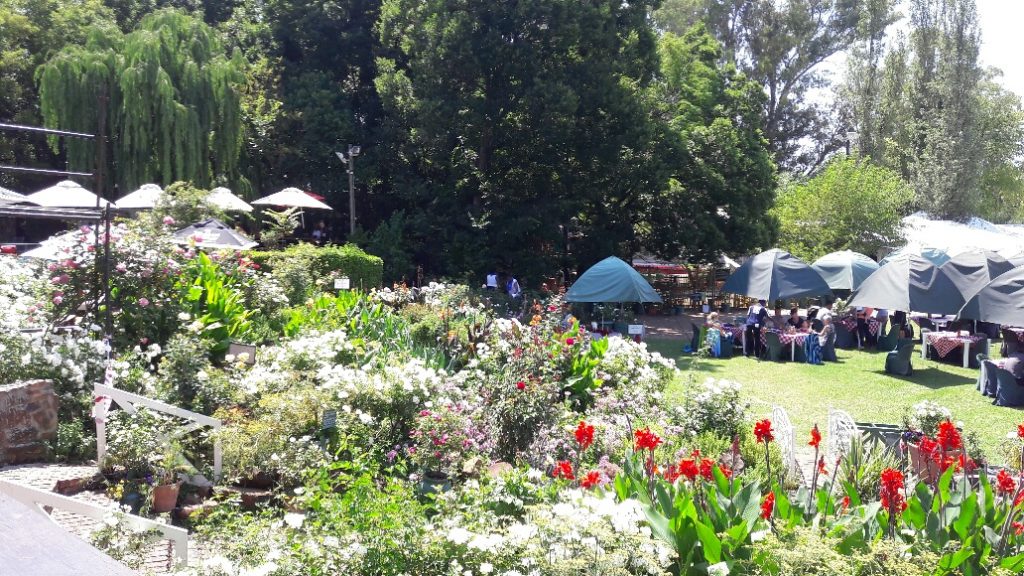 The introduction to the Vs was invaluable when I had to find Eskom – the sign is miniscule. Still, what joy; parking outside, five-minute wait, friendly staff. In Joburg I would have packed a book and blocked off the day.

Local buzz had given me two priorities to discover – Creative Talents and the restaurants of Three Rivers. Right. We headed in that direction and hit pothole hell. Ouch! My poor little car. Here you grow them BIG and DEEP! One had a bucket in it. The tricky part is choosing which to hit and miss as you swerve crazily across the road trying to preserve your tyres. No wonder there are so many motor places around.

Creative Talents was worth it, though. I lost Junior among the paints, beads, mosaics, papers, wood and other craft projects for more than an hour. We returned for a workshop which was great fun. I now know how to decoupage! I’ve also discovered how to grow bean sprouts, thanks to a patient gentleman at the Walkerville Farmer’s Market. Two down on my bucket list.

It turned out that Three Rivers was down the road from Creative Talents. You could have fooled me. The map looks like a spider’s web, round and round we go. Still, it has a comprehensive, modern River Square Shopping Centre with movies and a Woolworths – civilisation among the potholes. We spotted a restaurant or two and a river or two, or three, plus lots of flats and townhouses. Who lives in Three Rivers?

On to the Vaal. Not being a native Gautenger, I haven’t had much experience of the Vaal, except that colleagues were forever popping off for weekends in days of yore. Not so much now, it seems, but there were a few boats bobbing at Deneysville and Vaal Marina. It was Christmas weekend and I expected it to be buzzing.

Home again, unexpectedly close, not quite down the road, but not too far either. In no time we were passing The Hound Country Pub and Bistro, inundated at the time for Christmas buffet.

The Twisted Realm Creations around the corner was also preparing for guests. We stopped to inspect the succulents on sale and two entrancing kittens. My first, and probably lasting, impression of this laid-back venue is the smell of good coffee and the cats draped over the chairs. A cat always knows.