Not the Nine O’Clock News … 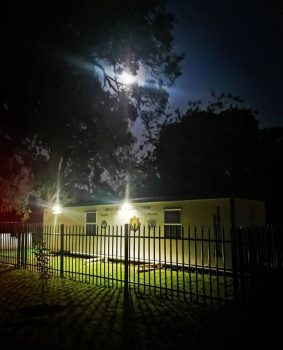 … nor the actual minutes

Perhaps it was the cold that got the conversation going, or perhaps it was the butternut soup and rolls donated by the Bird Nest, but discussion in the chilly O’Connor Hall at the monthly CPF patrollers meeting on July 9 was the most lively in ages.

Perhaps it was simply because the crime stats have also been the most lively in ages, if not exactly convivial. Forty crimes were reported in June, up 38 percent, ranging from murder and attempted murder to stolen gate motors, the perennial favourite.

Do gate motors disappear more readily on darker properties, Sean asked, suggesting a survey. Judging by the usual slides of moonlight and illumination on the crime stats, it makes no difference at all. If it’s gonna go, it’s gonna go …

Macabre humour at times, but then it’s a macabre subject, especially among the 50 or so oddly assorted characters in beanies and scarves who turn up for patrol meetings.

Can’t we get more sitreps? Mitch asked. Tantalising tidbits are flashed on Telegram or the radio and we never know what happens. No 10-page documents, Marcel said hastily. A couple of sentences are good enough … armed robbery, no injuries, SAPS on scene … that’s enough. A few disappointed looks.

The two new tactical leaders are obviously doing their homework. Three have opted out, six are opting in, the rest are being vetted. Training is essential, all agreed, and not just for the tactical trainees. Physical, said one, which raised some question marks about the shapes and sizes of the well-padded coats and anoraks around me. Universal, said the other. Everyone needs to know how to assess and secure a crime scene. The aspiring tactical characters can go on and write their exam.

Guns? The potential Rambo was shouted down. We are eyes and ears, Marcel pointed out yet again. We don’t rush into things. If you see a car that’s on a BOLO (Be On Look Out), report it, don’t chase it, don’t stop it, not even if you are dying to try out your bullet-proof vest.

If you do follow, do it from a very safe distance, Gill added. Better yet, go and park on the perimeter where you can see the car flash by and catch the details – licence plate, colour, make, direction.

The new radios are on the way, Marcel and Arno reported. From personal experience I can verify that they are infinitely superior. I can hear voices instead of crackle. It could take three years and it’s not cheap. You’re welcome to sell your bosvarkie, Marcel told us, but bring it to be stripped of its frequencies first.

Halfway through the meeting, the pizzas, sponsored by 1904 the original Henley, were drawn and won by Hotel 79, who wasn’t there to collect in person. He did call in for his radio check, though. The competition boosted the call-in rate, but there are still many radios gathering dust in dark corners. It doesn’t help if it’s dead when you need it. At the last armed robbery, the poor domestic had to hop, all tied up, to the neighbours for help.

There are two more pizzas to be won. Everyone who calls in for radio check between 19:30 and 21:00 in the evening 15 times or more in July will make it into the draw and the first entry out of the hat will win two pizzas.