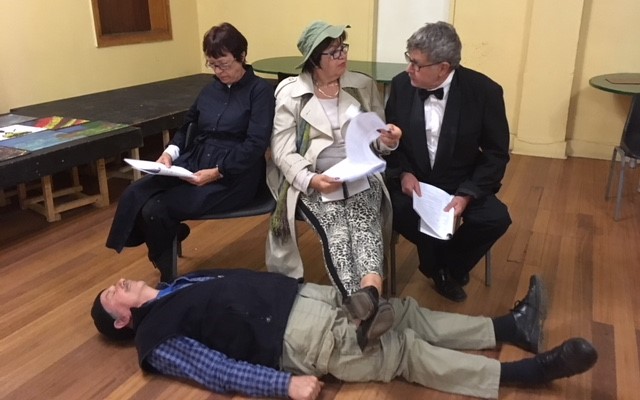 “Yes!” chorus the 15-odd members of the HPA, the Henley Performing Arts, taking up their positions in the O’Connor Hall for their latest show – Making Henley Grate Again later this month.

Some of the happiest times of my life have been spent in theatres – backstage, on stage, front of stage and in the audience.

Small wonder my ears pricked up when I found references to the Loslappies and the Henley Performing Arts when we first scouted Henley on Klip a year ago.

I really wanted to be a Loslappie. I didn’t make the grade as a drum majorette when I was young and (reasonably) slim, so I was enchanted at the thought of marching in uniform now that I’m over 50. Alas, it seems I am too late and the Loslappies are no more.

But the HPA is still on the go after 42 years, fuelled, I gather, by plenty of wine and lots of laughter. Well, that has been my experience since I trotted along to the auditions earlier in the year and landed a part in their latest show – “Making Henley Grate Again”.

I’ve been bemused and bewildered many a time, but then a newcomer into such a longstanding group, with founder members among them, must expect that. Tradition! I’m sure the audience will know the Henley song better than I do.

I gather the HPA has turned the O’Connor Hall into supper theatre regularly, putting on some ambitious shows over the years. I’ve heard references to The King and I, A Funny Thing Happened on the Way to the Forum and, most recently, the thriller I Spy (you can see it on YouTube).

Making Henley Grate Again is a mix of comic skits and songs with plenty of local references written, adapted and directed by Angus Gilfillan and Marie Thompson. It seems wine tasting has always been popular in these parts, the agenda of the road closure committee is a topical and controversial debate and, for good measure, Murder at Shillingford Manor is downright goofy.

Served up with dinner and dessert – and the facilities of Basil’s Bar – the show is sure to be fun. If the audience laughs half as much as we did in rehearsal, it’ll be riotous.

Shows of “Making Henley Grate Again” are on Saturday, October 27, and Friday and Saturday, November 2 and 3, at 7 for 7.30pm in the O’Connor Hall. Tickets are R130, including a two-course meal (a little birdie has mentioned chocolate brownies!). – Jennifer de Klerk